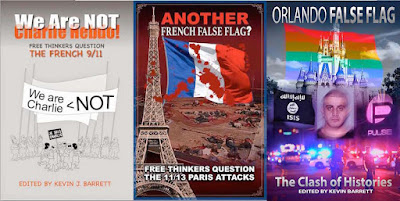 The so-called war on terror launched by 9/11 has continued thanks to ongoing media-hyped atrocities. But are these "terrorist attacks" what they seem?

Kevin Barrett's edited False Flag Trilogy deconstructs our biggest recent terror spectacles. Fifty-five leading public intellectuals break down the mainstream propaganda and suggest that the real story is very different from the one we're being told.

For more information about each of the three volumes, click on the title below.

We Are NOT Charlie Hebdo: Free Thinkers Question the French 9/11

Kevin Barrett
I'm the author of Questioning the War on Terror: A Primer for Obama Voters; Truth Jihad; A Guide to Mysterious San Francisco; and editor of 9/11 and American Empire v.2, and have taught Arabic, Islamic Studies, French, American Civilization and others subjects. Widely regarded as the world's leading Muslim 9/11 truth activist (for what that's worth) I spent 2006-2008 as the only talk show host featured on all three leading patriot radio networks (GCN, RBN, and WTPRN). I ran for Congress in Wisconsin's 3rd District in 2008: http://www.barrettforcongress.us Currently I'm working on a couple of book projects...